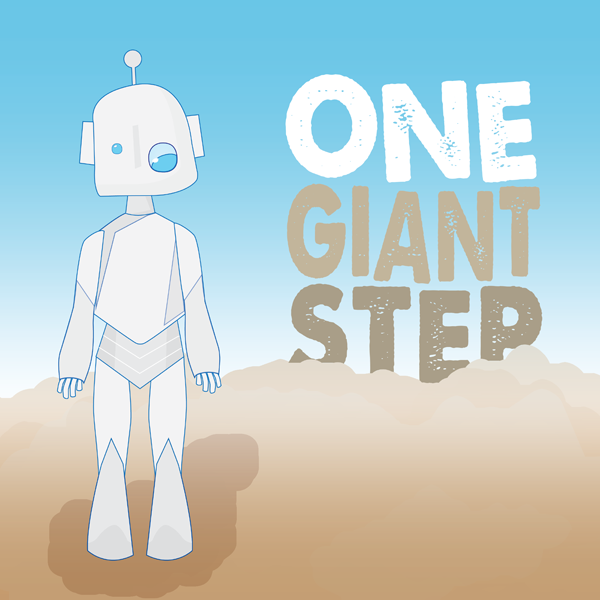 Mana and her family were at home going about their everyday lives. Watching TV, cooking, doing chores…that sort of thing.

Then they hear an eerie screech before a giant metal foot tears through the roof. Half the house had disappeared in an instant. Another few inches and Mana and her family would have been gone too.

Mona stared at the giant shining foot and slowly looks up to see where it came from. She raised her hand to her forehead (like a soldier saluting) to shade her eyes from the sun.

When her eyes adjusted to the brightness Mona could see it! A being the likes of which she had never seen before. A giant robotic being standing as tall as the sky. It stood four times taller than the 2-storey house it destroyed effortlessly.
Mona just stood there silent.

Without taking any interest in the miniature creatures the being continued walking forward. Two identical giants several kilometers ahead continued in the same direction. Where were they going?

Mona was brought back to her senses by the continuous buzzing of the doorbell. She hesitantly answered the door to find a tall, postured man glaring at her. He was more intimidating than the giant that just flattened her home.

Mona tries to close the door when the tall man suddenly demands ‘Wait!’ panicking. Standing straight the man quickly flashed an ID. He starts explaining how the unidentified giants need to be eliminated, and he has the means to do so.

Mona struggles to wrap her head around the situation. After his long and well-scripted the man revealed a polished silver sniper rifle. The body of the rifle was almost identical to that of the giant.

The (extremely cliché military) man told Mona to distract the giant while he found a suitable position to shoot down the unnatural being.
Mona pondered how only moments ago the giant destroyed her home and left her family injured. However, she didn’t believe the giant was evil or had any ill-intentions.

Mona quickly moved towards the slow-moving giant. A million thoughts are running through her mind.
‘What should I do?’
‘What if it kills me?’
‘Are my family alright?’

Before the giant, Mona was little more than a squashable bug. Even so…

Taking a deep breath, Mona yelled as loud as she could; ‘HEYYYY!’ She shouted until her throat and chest hurt. The giant stopped and turned to face Mona. After a long moment of silence Mona noticed the man lying in the rubble of what was once her family home.

Stretching her head backward, Mona looked up to see the head of the giant. She continued shouting at the giant. ‘What are you doing?’, ‘How could you destroy my home?!’ She would say anything to keep the giants attention focused on her.

Breathing ragged and ready to collapse…suddenly, A hollow echoing voice spoke to Mona. ‘I apologise human. We do not intend harm’. Mona looked all around her searching for the owner of the unnatural voice. With no other humans in sight Mona quickly realised where the voice came from. She looked up at the giant once again. The beaming sun made it impossible to make out the features of the creatures body.

As two similar beings move further in the distance the mechanical voice continued, ‘we simply have somewhere we need to go’.
The giant informed Mona how they expressed their intentions to the world leaders over a year ago, giving time to prepare for their arrival. ‘It seems they discounted our warning. Sadly we cannot wait any longer’.

Mona struggled to comprehend everything that was happening. How much time had passed?

‘I must go now’, the giant turned to follow its companions. In the blink of an eye, something shot by Mona. The military man had fired a shot.

Unsurprisingly, the giant remained unharmed. The soldier cursed as he rose from the rubble. He dashed towards Mona with a stern look. He couldn’t no longer hide from the giant. Wary of his approach, the giant turned back and reached down. It’s huge unhuman fingers caged Mona from the soldier, who was pointing his rifle directly at Mona.

The ground beneath Mona began to sink. The giant gently closed its fingers around Mona while lifting her up. Mona struggled to breath for a moment after the sudden elevation. The giant brought Mona closer to (what can only be described as) its eyes, examining her.

Strangely, Mona was no longer afraid of the extraordinary being. ‘Strange’ the giant spoke again. Mona hesitantly placed her tiny hand on the metallic finger caging her. Static pricked her fingertips at the touch. At that moment a white light appeared under Mona’s fingertips. ‘Huh?’ the giant said sounding surprised.

Mona lifted her hands only to watch the beam of light travel up the giant like a shooting star on a circuit board. Then Mona felt a burning sensation on her palm. She looked down to discover a strange symbol charred on her skin. She wondered where she had seen it before.

Mona stared at her bloody palm, her vision began to blur and then everything went dark.